A quick turn around for our junior footballers following on from Saturday's first round game we were in action again last Thursday in the Bushy Park venue. There was a certain form of pressure on the players here as we needed a result. Ballinacourty scored the first score of the game with a pointed free.  We responded brilliantly two minutes latter. Good interplay from defence to attack saw a pass into the corner to Donnchadh he soloed in from the left wing to the goals the ball broke and Darragh Mul was the quickest to react and he toe poked the ball into the net. On the ninth minute Ballincourty responded with a mix up in our defence to cancel out our goal with one of their own. Normally in these circumstances heads would drop a little but we responded well. Darragh Mulcahy went of solo run and the ball went to the energetic Kieran Geary and he pointed our first point from open play. Frees added to the next two scores with ten minutes gone with Ballinacourty accounting for one and Kieran Geary putting one over for us. At this stage the advantage rules was applied well by referee . At least three times in the opening half the rule was used and on all occasions our shots went wide and a free was brought back on each occasion. Ryan Grey got in on the scoring with a lovely thirty five yards shot that had us up a point 1-3 to 1-2 at the first water interval. A noted changed on the previous Saturday was how most playing were playing a notch above what they played on the previous Saturday. Jake Neville was having a great game in the corner, while he got out in front on many occasions , the most pleasing aspect of his game was how he tackled for the most part without fouling.  We started the second period with Jake Neville dispossessing a forward with tigerish aggression and ball yet again worked up the field and a free awarded. Kieran who was leading the team on possessions and on the scoring ,pointed the free and the man was surely brimming in confidence in the standard of play he showed on the field. Robbie Geary made two meandering runs up the field and on both occasions he was unlucky not the score. Our midfield was controlling things and Ian Beecher and Kieran Geary had a hand on most of the good things we did in the first half. We finished out the half with Darragh Mulcahy scoring a great point when he just blasted over following a Kieran Geary placed ball. We were full justified our three point lead of 1-6 to 1-3.

The second half started in a welter of excitement . Great play by Jake Beecher saw a long ball into Ian Beecher. He played a quick one two with Eoin McGrath and was upended inside the thirteen meter line . A penalty awarded. Kieran stood up to take it but the shot was turned out for a 45 which we missed as well. Wides either side of a Ballinacourty pointed free had us leading 1-6 to 1-4 with five minutes of the second half played. Great work by Donnchadh on the ball and he off loaded to Kieran who shot a great point with the outside of his foot curling the ball from left to right between the posts. Ryan pointed a free two minutes later and we had extended our lead to four points. Our defence was solid throughout the second half and Jake Beecher manned the center half back position  vigorously . Ryan scored a wonder point twelve minutes into the second half that I would tie himself and Kieran on our scores of the night. We lost Kieran just before the second water break and his loss was felt such was the standard we was playing. Brian McCarthy introduced in this period scored a great solo point with a busting run .. His size alone on the 25th minutes caused havoc and Eoin McGrath kicked the ball to the net. The night finished in the light of the Bushy park with us victorious 2-10 to 1-6. We collectively were hard working and used the ball well. There is no rest bite now as we play again this Sunday but I'm sure Seán , the two Dinny's and Diarmuid will have the boys primed.

Our third game in nine days brought us to the Cappoquin venue on a shimmering Sunday evening . After our first shot went wide Darragh Mulcahy picked up a loose kick out and fed Kieran who had made ten yards before hand passed to Jordan back in the side at wing forward, Jordan's side foot shot was smothered by the Kilgobet goalie when a goal looked likely. A Kieran Geary defected shot went out for a 45 which a Ryan Grey low trajectory kick sailed about three feet over the bar for the first score of the game.Five minutes passed before Kilgobet pointed a free between three wides for us.Ten minutes had passed since our last score and although we were playing well we needed to add to the scoreboard. A good mark from Dean Beecher saw him boot the ball into Shaun Sullivan who hand passed to the hard working Darragh  for a great  point. As the first water break approached Kieran Geary played a row ball into one of his business partners Donnchadh Mulcahy, he hand passed to the on rushing Darragh Mulcahy who availed of  his maker and cutting across the ball he hit a beautiful slicer arrowing the ball in off the post for a  goal. It was a great tonic as they took on their hydration and led 1-2 to 0-1 .Answering a Killgobnet free, Ian Beecher played a good ball into Donnchadh to passed to Jordan who worked a nice point. Five minutes to go in first half and Darragh Mulcahy intercepted a free in the Tallow hand back line . Jake Beecher's positioning all day was very good and his nice foot pass up saw him charging up the field he laid the ball off to Alan Curley who did very well to win it before he gave it to the steadfast Jake Neville who passed to Kieran who went fifteen yards with the ball before he kicked into Ryan who returned to Kieran who pointed for a great team score. Kieran was on a ton of ball and was involved in nearly everything good that Tallow did. Ryan followed it by pointed a nice score about ten yards to the right of the posts.A minute to go in the half and Kieran Geary back in defence launches a forty yard punt in the direction of Donnchadh Mul. Donnchadh gave a slight nudge in the back ( if it's good for Seamus Darby) and the ball went through to Ryan Grey. He got the ball and I'm not sure if you would call it a hand pass but the ball ended up with Donnchadh and he pounded the ball to the roof of the net. A minute later Shaun Sullivan pass was intercepted when goal was on and Kilgobnet got the closing score of half with a close in free which left us leading by seven points at the break 2-5 to 0-4.

After three wides and one ball dropping short going on eight minutes we created a good goal chance when a piercing run from Jordan had him pass the ball across to Paul O'Brien who palmed effort was saved but waved wide.It took ten minutes of play to get the first score of the second half  off the boot of Ryan Grey.Jake Beecher blocked a shot with his back when a score looked certain. Alan Curley was dismissed on two yellow cards on the forty third minute of the game. Jordan Henley pointed a nice curling shot from play when it would seem he was  disadvantaged from the original ball setting. Ryan pointed a 45 off the post thereafter .Five minutes to go and Ryan Grey pointed a free in which he was fouled himself.He got one from play after been played in by Ian Beecher. Eoin McGrath roofed a ball to the net after good interplay with Kieran. Kieran got in the goal act himself with the last kick of the game as he shot low to the net from five yards.The most pleasing aspect of the game for me was that we scored 2-04 when down to fourteen men. We play Ballyduff in the semi of the west on Sunday next at 2.00pm in Cappoquin.

Painting: We hope to finish the painting on Saturday next weather permittingat 9.30am . All help needed.

Deise Draw is on this Wednesday. Could all money owed be handed in please. The draw is being broadcast on Facebook live. 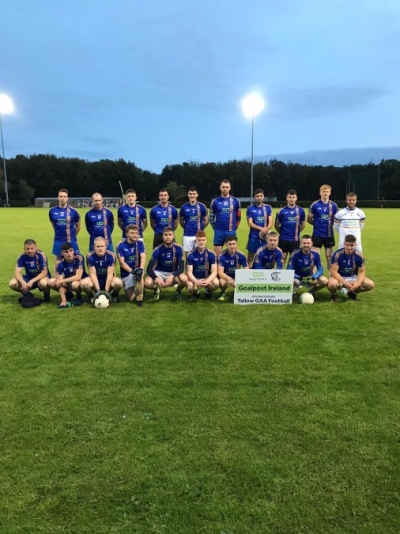 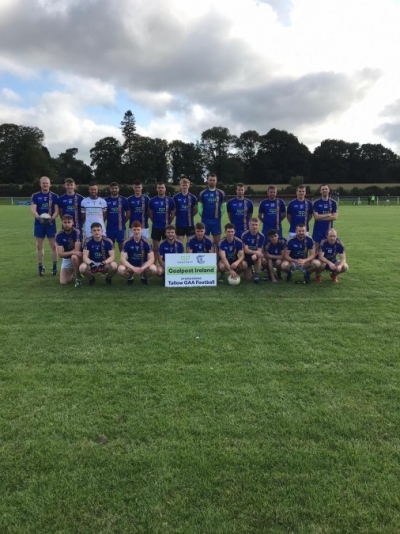