Tallow senior hurlers played Mount Sion on Sunday last in what turned out to be their last game of the season. They went in to this game needing a win or a draw at least to avoid a relegation battle. Mount Sion opening the game with a point after just one minute. Twenty five minutes into the game Mount Sion led by 2 points but Thomas Daly wasn't long wiping out the lead when he connected on a shot by Thomas Ryan to find the back of Sion's net. Mount Sion responded with a point and the sides were level as the first half drew to a close. Tallow 1-5 Mount Sion 0-8. Again Mount Sion opened the second half with a point after just 43 seconds. Ryan Grey pointed a free to ensure there was nothing between the teams. Frees seemed to be the order of the day, especially in the second half with Grey knocking over 5 points from placed balls. Ironically the only score from play in the second half was the very last puck to level the game. This ball came from the stick of the experienced James Murray. Final score Tallow 1-11 Mount Sion 0-14. We would like to thank the players and management for all of their work during the year and we look forward to the 2017 season.
Scorers: R Grey 0-7 (7fs) T Daly 1-0 J Murray 0-2 T Ryan and B McCarthy 0-1 each 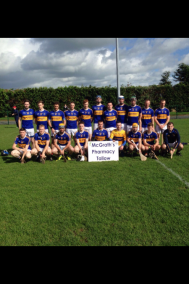 Wedding Bells
We send our best wishes to Paul Kearney and Pauline Shanahan who are getting married this weekend. We wish you a lifetime of happiness and all the best on you special day!!

Monthly Meeting
CLG Tulach an Iarainn monthly meeting will take place this Thursday 29th of September at 9pm. All committee members are requested to attend.