Deise Super Draw: Is on this Wednesday could all promoters please collect overdue money.

Committee Meeting: At the clubhouse for all committee members at 9pm this Thursday August 29th. 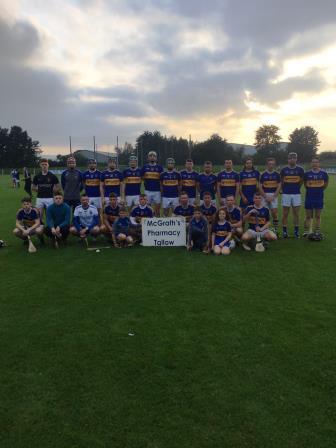 Unfortunately, Tallow's involvement in the Waterford Senior Hurling championship came to an abrupt end on Saturday. Entering the game with high hopes after some recent good performances, we never got going and now have to refocus for a tough local derby against Ballyduff in a relegation play-off this coming Saturday. 3 points from play over 70 minutes tells it's own story. Placed balls from Darah Buckley and Ryan Grey kept us within touching distance but the truth is that we were living on the edge. Shaun O'Sullivan was called into action twice in the opening ten minutes and we were struggling to get our forward play going. Saying that we took a 4 point to 2 lead and scores were being traded and all looked good. However Passage struck a vital goal near the end of the first half to lead 1-6 to 7 points. We rallied after the goal with frees from Darah Buckley and a monster free from Ryan Grey in his own half to trail 1-8 to 9 points at half time.

The renewed energy from the half time oranges quickly evaporated as Passage goaled immediately from a long distance free. Tallow responded with a long range point from Kieran Geary 4 minutes into the second half to make it 2-9 to 10 points. This was our last score from play. As we chased the game Passage exploited the space left behind and tacked over point after point with some impressive shooting to see out the win.

We play Ballyduff in the relegation playoff on Saturday at 3.30pm in Fraher Field .

Entering the same stage as last year, against the same opposition, we exited the championship again to the Fourmilewater team. They showed a vast improvement on our league encounter and had a stronger looking team. Eight points each at the half time we never got a hold of their physicality. We started well and were five points up after fifteen minutes mainly from placed balls from Mark Stewart.  Eoin Condon scored our only point from play in the first half. We got a dream start to the second half when Donnchadh Mulcahy got a goal from the throw in and another Mark Stewart free had us in a four point lead. That was as good as it got unfortunately as Fourmilewater took a stranglehold of the game and once they got their goal, the result looked inevitable. Try as we might we could not close the gap and in trying to chase the game we left the backdoor open for the counter attack.

While a disappointing end to a season that promised so much, these lads provided great entertainment over the year and played some great hurling.