Results
Our Junior hurlers were defeated by Dungarvan on Sunday last while our Senior hurlers defeated Mount Sion by 2 points. The latter game went to extra time and was quite an entertaining encounter.

Tallow Gaa would like to take this opportunity to thank everyone who took part and supported this fundraiser, run by the players to raise money for their training fund. This is the fourth year of this competition and it has grown in strength and numbers year on year. This year we had over 290 entrants and great credit is due to the players for their effort.

Tallow GAA Last Man Standing will be back again next season bigger and better. We will be starting earlier in the season and will increase the prize money to €500. We will also be introducing a prize for the promoter who sells the ticket to the winner.

We look forward to your continued support for Tallow Gaa both on and off the playing field.
Wishing You Well

We wish Martin Murphy a speedy recovery from an injury he picked up in the Junior match on Sunday. We also wish to thank the Dungarvan first aid officer for his help in dealing with Martin's injury.

Waterford v Cork
Anyone wishing to order tickets for the Munster hurling semi-final please have your order in to Lindsay by 10am on Thursday 1st of June. Adult covered €30, uncovered €25, juvenile €5. These are early purchase prices, tickets increase by €5 on match day.

Gary Duffin Cup
We are hosting the hurlers of Naomh Columcille from Tyrone on the weekend of July 7th. They will participate in the Gary Duffin tournament along with Tallow, Ballyduff Upper and Tourin. This is the second time Tallow will host it so it will be a busy weekend for our club. If you have a spare room and could put up a couple of lads for 2 nights we'd like to hear from you.

Auction
Plans are well under way for our fundraiser auction on Saturday, July 8th in Lizzy Langtons. Music on the night is by Newfoundland, many thanks to Lizzy Langtons for sponsoring the evening. The main auction item, a nomination to leading National Hunt sire Mahler, kindly donated by Mr Bobby McCarthy of Beeches Stud, Tallow, Co.Waterford, is sure to create a lot of interest among the horse racing fraternity. A donation from proceeds on the night will be made to the Injured Jockeys' Fund. We have many fantastic items up for auction on the night so be sure to join us for a great nights entertainment!!

Best Wishes
Best wishes to Brideview United who will rename Brideview Park to Leonard Fraser Park. A wonderful tribute to a man who gave so much to his Brideview club. This will take place on Saturday 3rd of June.

Scoil Mhuire
Well done to the boys and girls of Scoil Mhuire, Tallow, who won both of there Western finals on Wednesday last. They are both now through to the county finals. Date is yet to be confirmed. Well done to all involved!!

Cois Bhríde
Under 14 footballers had an impressive win over Kilrossanty in the Western Final on Sunday last. The under 10s qualified for the semi finals of the Ballyduff blitz. They will play Fermoy, best of luck to them. 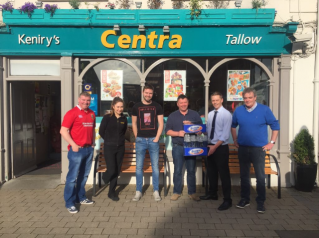 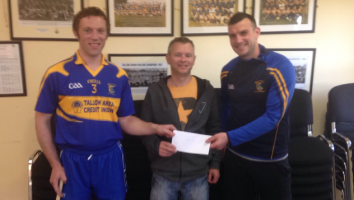 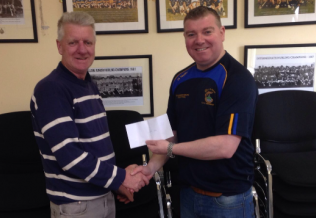