Our weekly lotto tickets are available to purchase from any of the promoters or any businesses around the town. Please support our local lotto. Tickets are €2.00

Junior Hurling
Our junior hurlers fulfilled all their fixtures but were well beaten again on Sunday last by St Mary's. Unfortunately they will have to wait until next year to restart their campaign. Our thanks to our panel of players and management team for their efforts this year.

Senior Hurling
Tallow 2-14 Abbeyside 1-16
If ever a game went down to the wire this one did when Tallow played Abbeyside at 8.30pm Friday evening, the second game in a double header at Fraher Field. Abbeyside, undeniably, had the better start firing over 4 points before Tallow responded. Our response came from an Evan Sheehan point, to which Abbeyside returned another one. Ryan Grey pointed a free but again Abbeyside kept their considerable lead with 4 pointed frees and one from play. At this stage in the game Tallow trailed by six 0-8 to 0-2. Tallow enjoyed one quarter on top with a goal by Paul O' Brien and points from Jake Neville and Ryan Grey. These scores kept Tallow in contention and they trailed by just one going in to the dressing room at half time. Tallow 1-8 Abbeyside 0-12. Tallow opened the second half with a pointed free to level the game. A spectacular save by the on form Shaun O' Sullivan lit up the stands and this game came to life fifteen minutes into the second half. Abbeyside dominated the next quarter and led by 3 points with 7 minutes to go. It looked like it was going to be another win for Abbeyside in the championship  but Tallow had other ideas. A quickly taken free by Thomas Ryan to James Murray rattled the Abbeyside net. This was the score of the game and levelled the sides yet again with ordinary time up. The final score of the game was spectacular. The sides were level, we were in to injury time and Tallow were awarded a free after a foul on Thomas Ryan. Free taker Ryan Grey stepped up. You could hear a pin drop in the stand. He held his nerve, put the ball over the bar and Tallow won by the bare minimum. Tallow never gave up and fought to the death. Shaun O Sullivan was outstanding in goal with two marvellous saves, both from close range. The defence held tight to the bitter end and up front the lads used the ball they got to great effect. Tallow will play Roanmore next. The date is yet to be confirmed but it is the weekend of September 16th -18th
Tallow: S O' Sullivan, M O' Brien, D O' Brien, K Kearney, A Kearney, J Murray, R Beecher, J Beecher, T Daly, P O' Brien, E Condon, J Neville, E Sheehan, T Ryan.
Scorers: P O Brien 1-3 R Grey 0-7 (5f, 65) J Murray 1-0 T Ryan, M O Brien, E Sheehan, J Neville 0-1 each.
Subs: B McCarthy, M Curley, K Fraser, R O' Sullivan.


U-21 All Ireland Final
Waterford u21 hurlers contest their first All Ireland since 1992 on Saturday September 10th at 5.30pm in Thurles. Tickets are currently on sale from tickets.ie and SuperValu/Centra stores. Seating is unreserved and tickets are €20 for adults and €5 for juveniles.

Cois Bhríde
The under 8s, 12s and 14s were all in action last week in various tournaments. Well done to all involved. 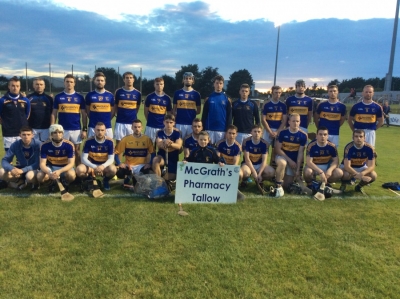