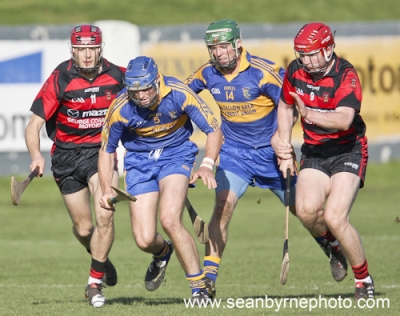 Tallow GAA Club is a thriving and dynamic asset to Tallow community which has built and continues to build generations of friendships, associations, support and wellbeing as well as providing great sport, fun and entertainment.

The origins of Tallow GAA club can be traced back almost to the foundation of the GAA itself in 1884. Though it is now predominantly a Hurling Club Tulach An Iarainn has a longer association with Gaelic Football. In Michael Cusack's Celtic Times, the Gaelic games newspaper published in 1887, Tallow is listed as one of only twelve football clubs in competition in Waterford in April of that year.

Hurling was introduced (or possibly reintroduced) early in the 20th Century and on the 19th August 1919 a meeting was called to establish the first Tallow hurling club. Bernard O'Leary was elected both Chairman and Secretary of that first committee. A young man by the name of Jim Deane appeared to be the driving force and was most influential in establishing hurling in the club. Originally from the Midleton area, Jim Deane worked as a baker at John Michael Beecher's in West Street. He was a true pioneer of the game, a player, coach and hurley maker all in one. He even made the sliotars. His daughter Eily married Bill Sheehan and the family to this day are involved in the club.

A number of challenge games were played in 1920 against Cappoquin and St Colman's, Fermoy but in troubled times the imposition of Martial Law, which banned gatherings at sports meetings and matches, seriously curtailed the activities of the GAA. Although knocked out in the second round of the Championship in 1923 and 1924 the team was progressing well and brought the first County Title to Tallow in 1925 when they won the Junior Hurling Championship.

From the beginning of the 20th century the Tallow club had something of a nomadic existence with no permanent playing field to call home. In those early years a group of lads would often take up occupancy on any piece of ground where a gate was found open. Other times a benevolent local farmer would offer the club temporary use of a vacant meadow. And so it went on for many years. At various stages over the years, hurling was played on a field at McCarthy's, Westlodge and on Luke McCarthy's field at the back of Eddie Cunningham's house. For much of the 1950's Tallow GAA club played their games in Curley's field at the western end of town.

In 1963, a ten and a half acre site became available at the eastern side of Tallow. The club owes much to the foresight of the people of the time who undertook the daunting task, at a time when money was scarce, of raising funds, or giving personal donations in order to purchase a home for Tallow GAA. Securing a home base was a significant contributing factor in the success that would subsequently follow.

Despite the on field success the club enjoyed over the following decades, little was done to improve the facilities at the club grounds at Townspark East. From 1963 to 2004 the club operated from one pitch and very basic dressing rooms. Due to increased demand on the pitch a second field was developed in 2004 from what was essentially bog land at the river side of the main pitch. This new full sized pitch was an outstanding success and is now in regular use for training and games.

With finance from generous supporters, who contributed in excess of €100,000, and a grant of € 130,000 from Lotto funding the old dressing rooms were demolished in 2006 and replaced with a new clubhouse. The clubhouse incorporates 4 modern dressing rooms, a general purpose area, equipment room and changing facilities for referees. The whole façade of the grounds was transfigured with the demolition of the old block perimeter wall and extension and resurfacing of the car park. The then new security fencing still allows a panoramic view of the valley and greatly enhances the area.

The next stage of development was the completion of an all-weather playing area and hurling wall together with a ball alley. These facilities were designed to speed up reflexes and hone skills as well for the general enjoyment of members of all ages. With a state of the art floodlighting system illuminating all pitches the grounds are complete and we thank all who have contributed in any way. The club grounds are dedicated in honour of Ned Power. The facilities at Páirc Eamonn de Paor we hope will serve as a fitting tribute to a man whose hurling life was given to the pursuit of excellence.

Facilities Available for Hire:
Any clubs or groups interested in hiring the all-weather pitch or ball alley should contact: Denis Tobin: 087 6857748

All Weather Pitch: The all-weather pitch covers an area of 66m x 20m. It is fully enclosed with a 5 metre reboundable perimeter fence. Suitable for serious team preparation or just having a bit of fun!

Ball Alley: 19m x 9.5m. With a quicker surface than the all-weather pitch as well as full surround the ball alley will speed up reflexes and give sportspeople that extra edge to react at speed.

For further information including Match fixtures and Personnel see http://tallow.waterford.gaa.ie.