Tallow GAA lotto sponsored by Kearney's Restaurant Tallow
Numbers drawn were: 3, 6, 22, 24
No winner
Consolation prizes: David O' Brien, Paddy Martin, Catherine Cronin, Pat Roche
Promoter: Pat Murphy
Next draw: The Hotel October 10th
Jackpot: €10,800
Our weekly lotto tickets are available to purchase from any of the promoters or any businesses around the town. Please support our local lotto. Tickets are €2.


Junior Football
Tallow v Shamrocks
This game was played on Saturday last in Ballyduff at 7pm. Michael Curley opened the game with a converted free to which the Shamrocks responded with 3 points in a row. A clever pass from Fada to Mark hit the roof of the Shamrock net, this left the sides level nearing the half time mark. The final score in this half was a Shamrock point. Half time Tallow 1-1 Shamrocks 0-5.  Stephen Pratt, the half time substitute got the first score of the second half, powering home a goal putting Tallow 2 points ahead. As the second half continued Tallow appeared to run out of steam and Shamrocks ran out eventual winners on a scoreline of 2-5 to 1-13
Scorers: S Pratt 1-2 (2f) M O' Brien 1-0 D Mulcahy J Murray 0-1 each M Curley 0-1f
Tallow: W Curley, A Curley, J Tobin, K Fraser, K Henley, J Henley, E Hickey, M Curley, M O' Brien, D Tobin, J Murray, D Mulcahy, S O' Sullivan, D O' Brien, B McCarthy.  Subs: J Neville, S Pratt, M Tobin, B Henley

Thanks Paul
We wish to thank Paul Beecher for taking time out of his hectic schedule to come and speak to the senior hurlers prior to their last championship game. He spoke fantastically and was extremely motivating to all involved. Thanks again Paul.

Litter
It has come to our attention that there has been glasses, cans, bottles and other items of rubbish left in the GAA pitch on several occasions of late. These such items are extremely dangerous where there are children playing on a daily basis. We please ask that you refrain from entering the pitch with such items and have some respect for the area by not bringing them in to the pitch. 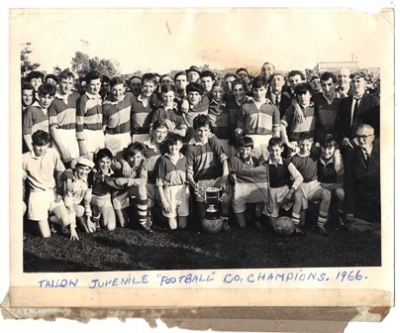 It's fifty years since one of the most important victories in Tallow GAA's history. The juvenile football title was won in Carrick On Suir (actually in Tipp) in 1966. It was played as curtain raiser to the Waterford Tipperary National Hurling league game. This victory was the catalyst for many more in the years to come.