hurling panel when they take on Wexford this Sunday, in Thurles. Thrown in is at 2pm.

Well Done
Waterford under 21s had a comprehensive win over Clare in Walsh Park on Wednesday last. They are now through to a Munster final where they will play Tipperary. Well done to our own Jordan Henley who had a fantastic game in goals.

Nondescript might be a bit harsh but this championship clash between Tallow and Colligan Friday night was uninspiring to say the least. On balance Tallow may have had enough opportunities to prevail but at times when points were on offer we didn’t go for them. Colligan made better use of possession and took their chances when presented.  The first half was evenly balanced until Colligan found the net just before the break to put them 1-7 to 4points ahead. Given the paucity of scores that followed, this was a crucial goal and a considerable lead.  Tallow added 4 points in the second half with Colligan managing just 2.  That tells its own story. Let’s move on.

Hard enough to pick a man of the match out of this but my vote goes to Stuart for his 3 point contribution.  No further fixture at time of writing. 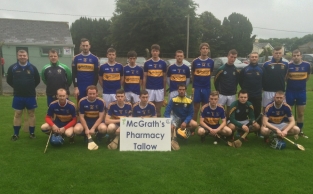 Fixtures
Our Junior footballers will play Sliabh Gua in Cappoquin this Saturday the 23rd at 7.30pm. Please support.