AGM: Our AGM is on the Friday 11th of February. Hope to see you all there.

This year is the twenty fifth anniversary of Tallow's minor hurling county win. With that in mind here is a piece I did on the occasion.

After an absence of eleven years a Tallow minor team reclaimed the minor hurling title in 1997 . Assisted by our neighbours the Shamrocks they pulled out all the stops to beat a favoured Mount Sion team. I asked three members of that team the thoughts on that period. Seán Slattery SS, Barry Power BP, Roy Henley RH.

After suffering a western final replay loss to Lismore the previous year what was the abiding feeling going into the that 97 campaign?

SS: I don't  recall discussing the defeat from the year before in preparation for 97- it was a sore point and remains in that category.. we knew there was plenty talent in the squad when the 97 championship began and there was a lot of training done to make sure we were tuned in, a lot of the lads that played the year before and definitely had the appetite to start winning

BP: Been thinking over and over about 97, great to get the email to jog the memory.

From my point of view the real making of us was the draw and replay of the 96 Western final against Lismore. Even though we lost and we had arguably the better team (Murray, Buddy, Murphy) it showed us a glimpse of the big time, the hype and competing in an A final and being the better team. Up to that we would do well against an Ardmore or Abbeyside but be beaten well in a final (u14 and 16, maybe 16 was a western semi final). I think the fact that we got there and performed showed that we were at the top table and would only get better.

I remember before the championship started that about six or seven of that team got a trial for Waterford minor hurlers. Wasn't the core strength of the team very solid?

SS: ​I had two rock solid lads in the corners sweeping up behind me and a Powerhouse in goals, from memory we only conceded one goal in the championship. job done.

BP: I’d agree with you about the players we got on the minor panel (Donovan, Slatts, Roy, Murray) but also the fact that we knew that you, Paidi, Paul, Shane Finn and Cart were as good as those on the panel, remember Paidi Tobin was a superstar in the making back then!!

Top it off with Murray who we saw playing at the highest level of 2nd level hurling and was Tallow's first 2 year inter county minor since....(?)

It’s hard to overstate James’s impact and influence. I remember hearing a story about Maradonna's first few years with Napoli (before the mountains of coke). He would run into the ground for his teammates, take on a huge workload in matches in training even though he was twice as talented as any of the others. Murray was like that, he was our Cryuff, our Maradona.

When I was training with Waterford minors I remember a few lads chatting after a practice match with a Laois or a Clare. Murray has missed that match due to a Colman’s match and the lads were now saying, in effect,’we’ll be ok for the next match against Cork because we’ll have Murray back’

It was mad to hear fellas from the East talk about a Tallow man like that!

We defeated Ardmore in Lismore on  a rainy night and Lismore in Cappoquin. Do you recall anything from each?

SS ​I recall just about getting over the line against Ardmore and a huge sense of relief when it was all over.. Roy Henley scored a point towards the end, not too many scores in that game.. The forwards cut loose against Lismore and it was over early on.

BP:  I remember the first round against Ardmore in Lismore .We scraped through that by a point, I made a save near the end.

RH: Ardmore in Lismore, won by a point. We didn't score any goals. I started wing forward and went in full forward on Declan Prendergast in the second half . I scored one point. Lismore next over in Cappoquin. I think. Mark Walsh was corner forward that day and scored three goals I think.

The day of the western final the team togged off above in "The Central Bar". Was that a surreal experience?

SS: ​I dont think we ever had to do it in a match prior to then, nobody was too concerned

BP: For a man who has always prided himself on a great memory I’ve f#ck all memory of the Western final..

RH: Yep togged out above in the central.

We got a goal from a goal mouth scramble ( was it John Donovan sideline?) and had a very hair-raising encounter at the end in our goal . Do you remember the events.?

SS: No hair raising from where I was standing.​ It didn't go over the line, it was merely a new method for taking the spin out of the sliotar and killing some time... the umpire on the right hand side of the goals didn't make a move and stood his ground..

BP:  I made a save near the end .A goalmouth scramble near the end,a ball that was scooped out of the goal. I remember people asking me if it was over the line, as if I cared!

RH: Won by a point I think again. I remember Paul Landy gave Murray a terrible time at center forward but we scrapped through.

Growing up the team got to a western title or two underage but was beaten by the then star studded Dungarvan team. They were subsequently knocked out by Abbeyside in the semi. Did that instill belief in the team?

SS: We didn't know much about Abbeyside before the final, the belief came when we won the western final and we know what happened next....

The county final build up and game...

SS: It was  great to see the people who had driven us to matches from u12 up on the bus as we headed to Walsh.. with our new set of jerseys we got a cheer as things got underway.. It was a fairly rough encounter and Tallow got  a great start... It was full on defence in the second half with James Murray frees keeping the score board moving on our side. A lot of lads dropped fairly deep into our half which provided some cover... we were relieved and thrilled on the final whistle...

Anyway...yeah the Newtown games in Fermoy gave us serious confidence, we knew they were good when we played them but I can’t remember them being built up as the best team in Cork or anything like that. As I remember, Ben was the real star, Jerry was a bit behind him.

As I mentioned before, I felt we took a lot from the two Western finals the previous year against a good Lismore team.

Can’t remember much discussion about the Sash jerseys, think they were Moroneys idea? ( I think it was John McDonnell who got them)

Charlie langers was something waiting to happen all year... he was on a tight leash and he broke out on Horse Fair day (was that the only time?) I remember Liam Aherne being like Kofi Annan and trying to shepherd him out of the field, smiling and saying ‘cmon Charlie we’ll see you next week’ and Charlie saying ‘you won’t see me no more’

It probably was our first time going to a match in a bus. I sat beside Drum I think. I remember the bus going up the sweep and looking out the window and feeling ‘we’ll be coming back here with the cup in the evening’

We knew of Mount Sions reputation but we would have had little experience of city teams and I was taken aback by the mouthing and sledging, it wasn’t done much in the West. They were dirty and, typical of bullies, they got worse when they were beaten.

We were always capable of getting goals, Roy was a force at that level and Paudie was too. Our direct tactics and Charlie keeping it moving made sure our inside line got plenty of ball.

Our defending was heroic, Slatts was a serious full back underage, his hurling was so good he didn’t need to be overly physical. Switching the two Murray’s in the second half gave us a foothold in midfield, Paul was always suited to centre back better.

Forgot about the close shaves we had too, I made one good save, Slatts cleared another one.

I wasn’t there for going to the nursing home.

Think we all went to Murray at the end, he was our touchstone.

I know he became more paranoid and cautious later as a manager but back then Bubs was a revelation, he was so enthusiastic and he could get on with everyone. I think we all looked up to him, he was one of the best players on the Senior team and had an All Ireland medal.

I do remember being overcome at the presentation (‘‘tis in film). Probably because I met Ned just before it, also it had been heartbreaking the year before, it was such relief to get over the line

RH: I remember walking into Tallow that morning from home, nervous, excited about getting the game started.Met Johnny Curley at the square before the bus ride to Waterford. The bus ride down I sat in the back of the bus and wished we were there already. I remember James Murray the captain sitting with me for a few minutes and saying " that we couldn't come to Waterford and not win, it would be a complete waste of time to come this far and not see it through". We had a job to do and have to do it.

I remember scoring the first goal around the 5 minute mark when a ball came across the square head high and I pulled in the air and directed it towards the goal where the goalie fumbled it into the side netting. In the process I caught my man and he was down getting attention for some time. I scored another goal about 10 minutes later when a ball was dropping into the square and I was able to get something on it and direct it to the roof of the net.

We went in at half time after building up a nice margin but knew that the second half was to come into a strong breeze.

The second half was all Mount Sion and our backs resisted surge after surge.I was kicked on the ground by my man Ian Farrell with ten minutes to go , which resulted in him being sent off.

We were able to close it out with some excellent free taking into the breeze by James Murray.

When the whistle went I remember seeing my father crying on the line and then crying myself while we marched up to get the cup. We had a couple of soft drinks that night. 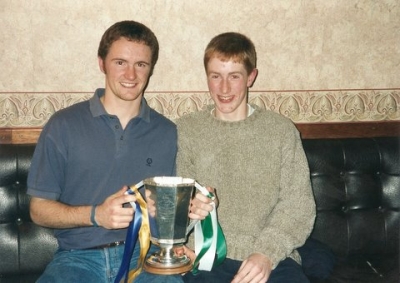 Barry Power and James Murray with the Minor Cup

Sean Slattery beside James Muray on the lorry at the square 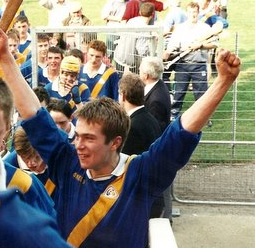