side on Thursday last in Fraher Field. Attendance was poor, possibly due to the match being played on a Thursday or possibly there was another reason or two. A depleted Tallow team, due to suspension and injury, meant that realistically we knew we were up against it from the get go. Fourmilewater opened the game with 5 points in a row. Robert Beecher gave the Tallow side some relief when he got them on the scoreboard with a well taken point under immense pressure. Two more Fourmilewater points depicted the one sided nature of the night. This was followed by a pointed free by Paul O Brien. Things didn't improve much when, in the next 10 minutes FMW pointed 4 from open play to Tallow's two frees. The writing looked well and truly on the wall after 25 minutes. There was no major change in the way the game was being played and the scoreboard at halftime looked worrying - Tallow 0-5 Fourmilewater 0-13. The Tallow defence were under enormous pressure with the amount of ball they had to deal with and they worked as tirelessly as possible but Fourmilewater seemed just too strong.
Again Fourmilewater opened the second half with a point from the stick of Liam Lawlor. Paul O Brien pointed a free, as did Jamie Barron for FMW. Both players exchanged points a second time. The next 20 minutes Tallow were outscored seven points to four. Final score Tallow 0-11 Fourmilewater 0-24. It may be early in the championship but Fourmilewater look like they may be ones to watch. They displayed some superb individual and team play throughout the game. They managed to score 19 points from open play. Tallow need to now focus on the next game and hopefully they will have a full squad to pick from. Onwards and upwards, no point in dwelling on what might have been.
Scorers for Tallow: P O Brien 0-6 (5F 65) W Henley 0-2 (1F) J Henley(F) R Beecher, J Murray 0-1 each.
Tallow: S O Sullivan, M O Brien, D O Brien, K Fraser, A Kearney, J Murray, J Beecher, P O Brien, M Curley, R Beecher, B McCarthy, S Feeney, T Daly, J Henley, E Sheehan.
Subs: W Henley 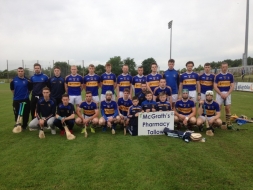 Best Wishes
We wish Paul O' Brien and his bride to be Niamh O' Neill best wishes for their wedding this Saturday. We hope the sun shines on your special day and may you both have a lifetime of happiness together.

Fixtures
Our Junior Hurling game scheduled for Thursday 16th of June has been postponed to a later date.

Parking
To all players, mentors, parents and supporters, could you please refrain from parking in the disabled parking spaces at the field. These are for disabled drivers and passengers only!

Comhghairdeas
Huge Congratulations to Brideview United who won the Ned Barry Cup on Sunday last, the celebrations are surely still in full flight with the Euros being perfectly timed. Well done to all involved