Last Sunday's encounter could have gone either way up to the final whistle, however, Abbeyside just shaded it by the narrowest of margins with two injury time points. Ian Beecher opened the scoring with a well taken point. From here Abbeyside went on a rampage scoring five points without reply. Scores from Paul O' Brien, Thomas Ryan and Jordan Henley kept Tallow very much alive in the first twenty minutes. Tallow were dealt a huge blow when Paul O' Brien (who had started the game in flying form) was substituted through injury. Tallow showed huge character to power through until half time. Three magnificent saves by Shaun O' Sullivan, the organisation in defence and huge work rate around the centre and up front were crucial factors in ensuring the sides remained level at half time with ten points apiece. Tallow and Abbeyside exchanged points at the start of the second half, Tallow's one coming from a long range free taken by Thomas Ryan. This second half was stop/start due to the large volume of frees (19 in total) despite the fact that the game was played in a sporting fashion. The sides were level three times in the first fifteen minutes of this second half. Tallow went ahead mid-way through the second half when Bob McCarthy set up Thomas Daly for his first score of the game. The last quarter was nail biting stuff with both teams not willing to give an inch. Abbeyside finished the game with the last two scores to win the game by a single point. Disappointing for Tallow who gave it their all with a much improved performance from the previous week. Final score Tallow 0-18 Abbeyside 0-19.

CLG Tulach an Iarainn will hold their monthly committee meeting this Thursday, April 27th, at 8.30pm in the clubhouse. all members are requested to attend.

CLG Tulach an Iarainn wishes to extend sincere sympathy to the family of John Daly, Youghal and Tallow on his sad passing. Ar dheis Dé go raibh a anam.

Photo shows the Tallow Senior Hurling team who were defeated by Abbeyside on Sunday last in Fraher Field. 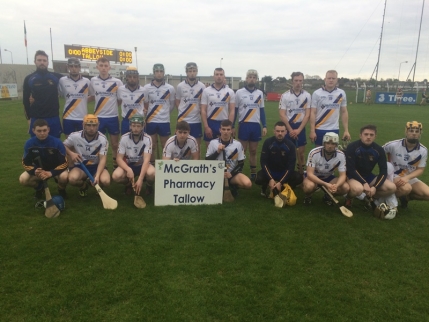