AGM  Our Annual General Meeting will take place this Friday, December 4th at 8pm in the clubhouse. Please make an effort to attend.

Draws Any outstanding monies for the Deise Draw or National Draw can be paid to David O'Brien, Kate Ryan or any of the promoters.

The gereral impression from the drawn game back in May was that Cois Bhride were lucky to get another day out and Brickeys were strong favourites for the replay at Dungarvan grounds last Friday night.  We had become so engrossed in the expolits of our minor hurlers over the last 6 months that this was almost the forgotten final.  whatever changed in the intervening period, Cois Bhride were a transformed side and they produced an outstanding display to win this replay comfortably by 10 points.

Captain Eddie Hynes opened the scoring for Cois Bhride and they never looked back. Brickeys had a period of dominance over the second quarter but failed to convert it to scores against a resilient CB defence. The Tallow/Shamrocks combination led 6 points to one at the break but you got the impression that Brickeys had not settled and it could be a different story in the second half. The expected resurgence from Brickeys never materialised however and when Ryan Grey converted a penalty, following a well taken point from Darah Buckley the lead was stretched to 8 points. Our lads grew in confidence and pressed home their advantage with further points from Ryan(3), Eddie Hynes again and the impressive John Paul Lucy. The sides exchange points over the final 10 minutes but the Cois Bhride lead was unassailable and they closed out the game with some ease to win by 10. For a bunch of lads who didn't have much of an opportunity to familiarise themselves with the bigger ball, due to their involvement in the hurling championship over the previous months, they played quality football and looked fit and sharp. The panel and selectors put in a huge effort over the year and were rewarded with a county title.  Well done to all.  Our thanks to chairman Tony Ryan and the Dungarvan club for the use of their excellent facilities and their generous hospitality to all attending the game! Cheers Tony.

Young Hurler of the Year: Congratulations to Jordan Henley and Ryan Grey who were nominated for young hurler of the year award. Both lads had an outstanding year.

Photo shows Alice Tobin being presented with a cheque by Denis Tobin and Mairead Sheehan for her recent win in the weekly lotto. 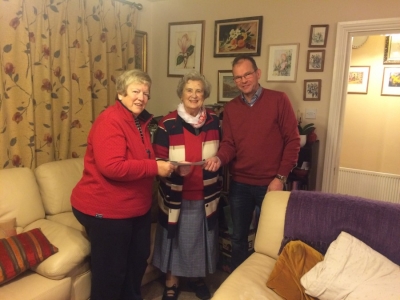