Stepping up to adult grade can be a daunting experience.  This week I spoke to Ian Beecher about his step up to playing adult hurling from underage.

PRO: Before one could play adult hurling at any age deemed one was good enough. It changed then to 17 and follwed that to 18. Had you played junior grade before you played senior grade?

IB: Don't remember U14 one. Got 2 goals in the first Minor county, were up by 8 with ten minutes left and drew, lost replay.

PRO: So you played Senior before you played Junior, how did you feel with the age restrictions in so far as you were eighteen before you could play adult hurling?

IB: Didn't bother me really I was playing with few underage teams so was busy with that.

PRO: The first few challenge games and league games how did you find the speed of the game, strength of opponents etc.

IB: Played at a higher speed. Opponents were generally much older and were much stronger.

PRO: How did you find the speed of the game in your first championship encounter?

IB: The speed of the game was faster than underage hurling but it was the strength of players that really surprised me. It was much harder to beat opponents, was nearly bullied out of it. Also was taken off at half time on debut which shows it didn't go well.

PRO: You came up against the Ballygunner halfback line of Mahoney, Hutchinson and Walsh. Pretty strong. How did you feel on the build up to the game and the day of the game?

IB: Build up to the game went fairly well I thought. Obviously was a bit nervous due to playing such a big side and especially because it was first championship game for the club.

PRO: How much of a help were your brother Robbie with about two years experience and James your uncle in stepping up?

IB: The two lads were a huge help to be fair. I suppose James was always giving advice before and after games and wishing the best beforehand which helped alot. Rob made me more comfortable I suppose in the dressing room with lads I hadn't played with before  which was good, and he also told me who to stay away from at training.

PRO: How was your confidence after the game?

IB: Confidence wasn't great to be honest after. We were beaten badly and had a bad game personally too.

PRO: How did the rest of the year go for you?

IB: Rest of the year went well I thought for my first year. Got to play a nice few matches which boosted my confidence and I got experience under the belt. 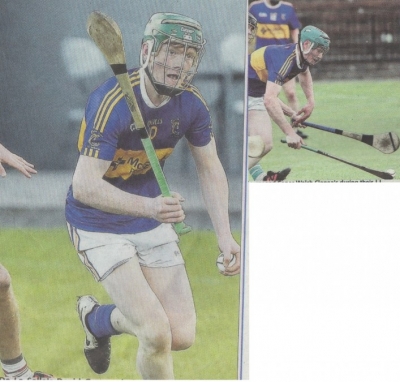