It may not have been as comfortable as the eight point winning margin suggests but Tallow, without reaching any great heights did enough to garner their first championship points against Clonea in the Fraher Field on Saturday evening. Newly promoted Clonea will rue the many missed chances they had, especially in the first half when they had a strong breeze at their backs. Tallow handled the wind better and were not near as profligate with possession as the opposition.

Clonea got off to a lively start, popping over two well taken points from play. It was a short lived lead as Darrah Buckley (f) and Tommy Ryan (from play) responded immediately to level with less than 5 minutes gone. Billy Power cut over a beauty of a point from the stand side line to briefly restore his side’s slender lead. Points were traded with Darah Buckley striking well against the wind. Ian Beecher weighed in with a brace. With 25 minutes played, and Tallow just a point to the good, Tommy Ryan seared a path through the Clonea rearguard to set up Kenneth for his first goal. The “small fellah” is revelling in his new role in attack and added another goal early in the second half. Darah Buckley clipped over 2 more points to extend Tallow’s lead to 5 lead. Yet again Clonea rallied with a goal and a point to reduce Tallow’s advantage to a single point (1-9 to 1-8) as the half time whistle sounded.

The first 15 minutes of the second half was a tight enough affair although Ken’s second goal gave us a degree of comfort. Rob Beecher got too critical points from distance at a crucial stage of the game to hand the initiative to his team It boosted Tallow and we reeled off a succession of points from Tommy (4), Paul O Brien (2) and Jordan. Clonea on the other hand managed just 6 points (all frees) over the entire second period. The Eastern team were well in the game for much of the second half but for some reason faded completely over the last 12 minutes to allow Tallow ease home.

We play Ballygunner next in our final group game. We have no confirmed date yet but it may be the end of July. We have reached the league semi-final. Awaiting a fixture.

I’m filling in for our PRO Fada this week. He gave me carte blanche (just showing off my French) to delve in and cut loose with no subject off limits. I wondered did he want a dissertation or a thesis on the merits of Waterford hurling or the metaphysical versifiers. I am more in to the Romantic poets myself like Keats and Byron although for obvious reasons Yeats is my favourite. I have studied the works of the Bard, enthralled and enthused particularly by Macbeth, his greatest Tragedy. We were mesmerised by the majesty of Gerard Manley introduced to us by Fr Michael Mansfield. We knew Kerouac as well. Country bumpkins from Tallow and places. We too read To Kill a Mockingbird thanks to John Cullinane, God rest him, who was an inspirational teacher. He engendered loyalty and admiration. He awoke our imaginations.

What has all this to do with Waterford hurling you may ask? Well it’s the thing to do at the moment, draw your analogies from stage and field. It’s just it feels like the stage is crowded now. Maybe it’s time for some to exit? You’ve had your time in the sun but you can’t leave it go. You just don’t get it! I’ll keep it short as it has been played out ad nausea in the media and wherever hurling folk gather. It goes back to I think 2013 when Kilkenny turned us over in a league game in Nolan Park, heralding a dismal change in Waterford hurling. It was defensive, negative, frustrating and soul destroying – and that’s only for the supporters. Many hurling people stopped going to games. I can’t see how our players could have enjoyed it either, especially our forward (usually we just had one). I don’t know if our current management will do the business but they deserve a chance without the ghost of Banquo hovering in the background.

Congratulations to the staff and pupils of Scoil Mhuire who received the new GAA 5 Star Centre Flag for their participation in the Scheme. This was the first year of the scheme and 30% of Waterford schools participated, the highest in the country 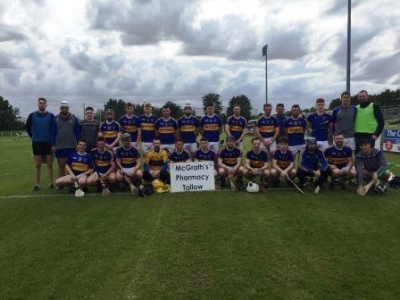